Many companies discuss how they should strategically approach the digital transformation. A clear data strategy would be much more important.

When it comes to a roadmap towards artificial intelligence (AI) and data-driven thinking, most German company leaders are still in the dark in 2020. In many places, there is still no data strategy that makes it clear to the companies and their stakeholders where the journey is to go. One reason for this: many specialists and managers do not distinguish between a digital and a data strategy.

Digitalisation is actually already old hat. It celebrated its first high phases in the 1990s with the establishment of ERP software, websites, e-mail and scanners with text recognition. However, the associated change in companies is a lengthy process that continues to this day. It is currently being fuelled by mobile applications (apps), blockchain projects and the networking of things (Internet of Things). These technologies are driving digitalisation forward.

In the near future, logistics processes will be handled with the help of autonomous drones, contracts will be legitimised via the blockchain and many sales will be triggered or at least paid for via mobile applications. These are topics primarily for software developers and engineers, often led by the so-called Chief Digital Officer.

These protagonists develop the digital products and processes further. As a rule, the latter are not translated one-to-one from analogue to digital, but in the best case completely redesigned. The result is digital transformation. It ensures, for example, that there could hardly be any travel agencies or cashiers in the future. The blockchain will presumably reduce the importance of notaries and brokers are also likely to be less needed thanks to mobile applications, augmented and virtual reality. Almost all human intermediaries can be largely replaced by digital services.

The situation is different with trends such as big data, analytics, data science or AI. This is not about generating, but rather using data that is created by digital systems in the first place. The data in a blockchain, from mobile apps or autonomous vehicles are stored in databases and are just waiting to be evaluated. 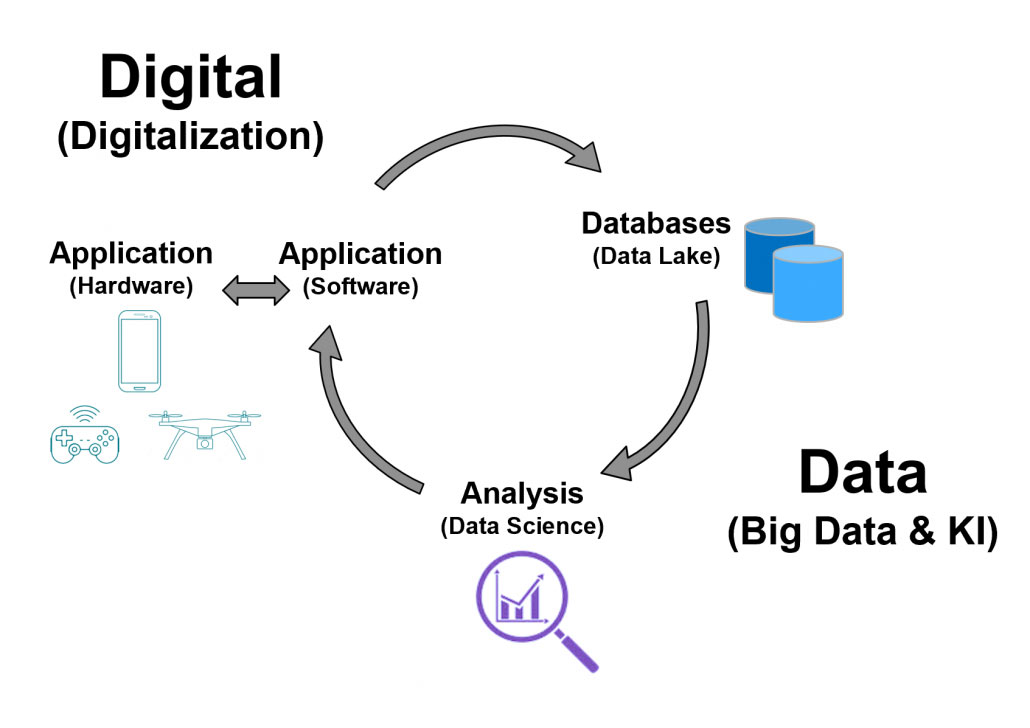 The insights from the use of data are then made available to the digital systems in real time, for example as a forecasting service, or provide information about which improvements to the digital products could be useful. In the future, data and AI can be used to automate accounting processes, make medical diagnoses and control autonomous vehicles on the road.

Consequently, the terms digital and data do not mean the same thing. In fact, they overlap less than might be expected at first glance, but they are interdependent: for example, analyses of purchases or customer orders are clearly a data topic. However, they are only possible because the company has already digitised itself with the introduction of an ERP system. The findings from the use of data then flow back into product improvement in the sense of digitalisation.

Data is therefore the second step after digital and adds memory and machine learning to the digital processes. This is where artificial intelligence comes into play, whose further development will dominate the new decade that has begun and increasingly take over operational decisions in companies.

Digital versus data strategy
Against this background, pioneering companies make a clear distinction between a digital strategy and a data strategy. For example, there are both digital labs and data labs within the same group. The Digital Lab deals primarily with topics such as software development for mobile applications, social media, blockchain or the Internet of Things (IoT). The Data Lab, on the other hand, is concerned with the storage and analysis of data from the classic IT infrastructure as well as from the new applications. Such tasks are performed by experts such as data engineers and data scientists.

Digital and data strategies can also be differentiated in a similar way. The digital strategy deals, for example, with how services for customers can be improved via mobile applications or how products can also be used as data suppliers with the help of sensors and displays.

The data strategy, on the other hand, deals with the efficient storage of data, compliance with data governance, taking into account data security and data protection, as well as the analytical methods and tools for achieving the goals associated with the use of the generated data. However, this does not mean that data strategy cannot be a separate part within a digital strategy.

Anchoring “data-driven thinking” in the company is a long-term project. Nevertheless, in order to be able to start using data in a structured way today and to continuously expand it, a roadmap for projects with concrete descriptions of problems and solutions is needed. Companies should define the goals and identify the right data sources and analysis methods.

Questions about the required software, hardware, team organisation and staff qualifications also need to be clarified. Data analytics in general and artificial intelligence in particular require a lot of good quality data in the right places. A data strategy works towards these goals. It can thus also be understood as a business plan for data use, which describes the goals and prerequisites for this use, but also clarifies further requirements, limits and the procedure.

Not only for large companies
The possibilities for data use are almost unlimited if access to data sources external to the company is also included in the data strategy. Even medium-sized companies today have a large treasure trove of data from internal sources. This can be used, for example, to optimise purchasing processes and supply chains, to better understand customer demands and to assess internal financial risks more accurately. A data strategy is therefore not only interesting for large companies. In many cases, start-ups are also building their business model directly on data and AI.

For some companies, digital strategies are less important because their business revolves around e-commerce anyway, for example, or was founded directly on digital platforms. This is often not the case for companies from traditional industry, for example, if they are driving digitalisation via machine networking in the sense of Industry 4.0 and interlinking production facilities much more closely with IT systems.

Such companies need a clearly formulated strategy on how digitalisation and the transformation associated with it are to be managed and driven forward. A data strategy that describes how machine data is to be stored and evaluated should then either be separated out as a separate strategy work or formulated as a fixed component of the digital strategy.

A senior data scientist is not enough
Whereas just a few years ago there were often calls to establish data science as a separate discipline in the company and to hire data scientists, today most large companies and also many medium-sized companies have such specialists. But despite the high level of competence of Data Scientists, many companies are disillusioned when it comes to their impact.

On the one hand, because there is a lack of good data engineers who can efficiently collect data in databases and effectively provide it via interfaces. On the other hand, because the data scientists are often left alone by the management. There may be a prejudice here that data science is a self-contained area of applied research.

It would make more sense to consider it as an interdisciplinary cross-sectional function for all other departments. Even the best data scientist has no effect in the company if his findings are not used or implemented in projects due to a lack of openness. And even very motivated Data Scientists can only swim against the tide for a limited time.

Moreover, data scientists do not have data competence to themselves. All other technical staff should also have at least a basic understanding. After all, even central departments such as those for business intelligence or the more experimental data labs cannot manage without expertise from the respective departments.

This becomes visible at the latest when it comes to putting analysis systems into production. Moreover, the really useful solutions do not come from a central location, but directly from the departments. No company becomes “data-driven” through a central department.

This development must run through the entire organisation. Companies therefore need a general data competence, not only among the specialists, but also among the managers. The latter must advocate solution-oriented thinking, always keeping in mind the role that data can play in this.